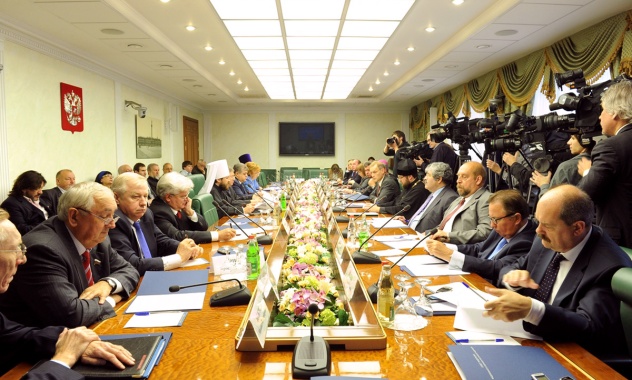 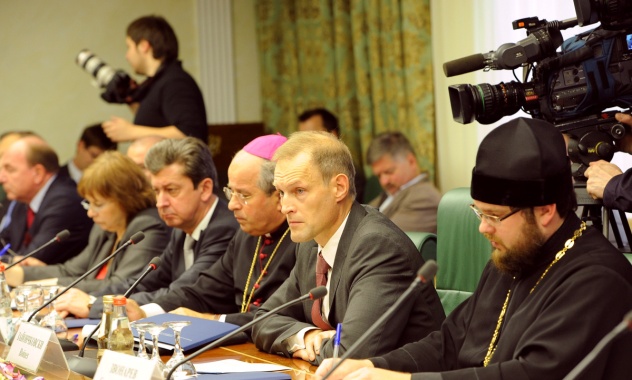 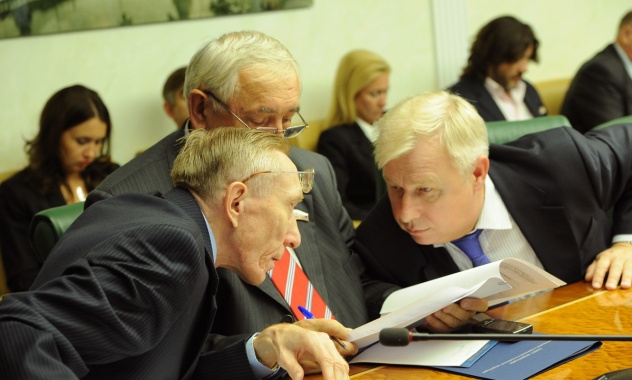 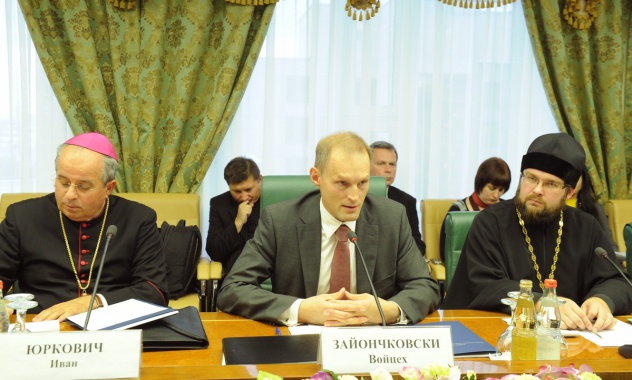 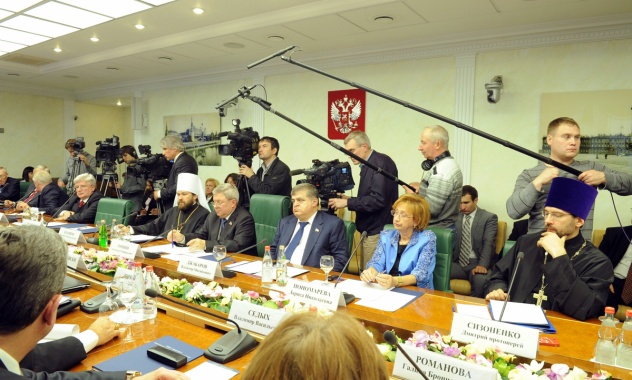 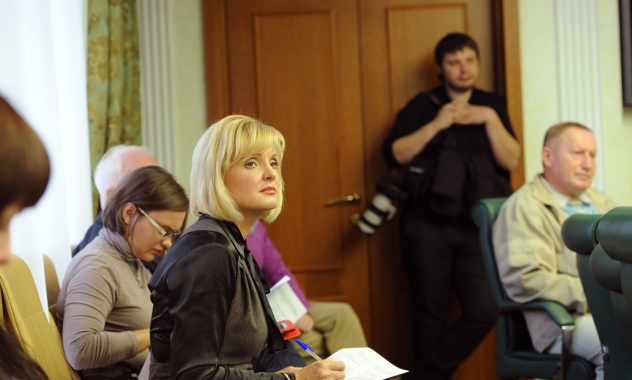 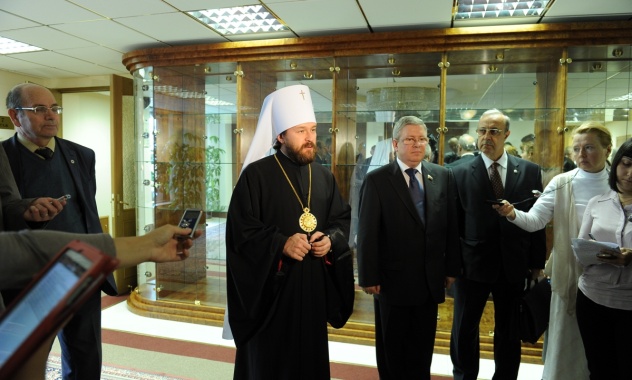 On September 26, 2012, a round-table conference took place at the Federation Council of the Russian Federal Assembly. It was devoted to the consolidation of Russian-Polish relations and the contribution made to this process by the Russian Orthodox Church and the Roman Catholic Church in Poland.

The round table was organized jointly by the Moscow Patriarchate Department for External Church Relations (DECR), the Synodal Information Department and the Federation Council of the Russian Federal Assembly. Among its participants were Metropolitan Hilarion of Volokolamsk, DECR chairman, Archpriest Sergiy Zvonarev, DECR secretary for the far abroad, and Archpriest Dimitry Sizonenko, DECR acting secretary for inter-Christian relations.

The Roman Catholic Church was represented by Archbishop Ivan Jurkovic, apostolic nuncio to the Russian Federation.

The conference was attended by members of the Federation Council and representatives of the Presidential Administration, State Duma, federal ministries and departments as well as public organizations.

The meeting was opened by the introductory remarks of A. Torshin, first deputy chairman of the Federation Council.

Metropolitan Hilarion, who spoke next, dealt with the results of the visit made by His Holiness Patriarch Kirill of Moscow and All Russia to Poland in August, 2012, when a Joint Message to the Peoples of Russia and Poland was signed at the Royal Palace by the head of the Russian Orthodox Church and the president of the Polish Bishops’ Conference, Metropolitan Jozef Michalik as a result of the work carried out for several years at the joint initiative of the Russian Orthodox Church and the Roman Catholic Church in Poland.

The Message called to reconciliation and mutual forgiveness in the spirit of Christian love. Politicians, public leaders, scientists, people of arts and culture were called to develop dialogue and to restore mutual trust between the Russian and Polish people. The efforts to be made together included the protection of the institution of family and marriage as well as human life and the defence of traditional moral values.

In his remarks Metropolitan Hilarion noted that the Russian and Polish people were gradually returning today to the faith of their ancestors and to Christian culture, motivated by the religious worldview not only in their private but also public life. ‘Calls to repentance and forgiveness are not a political slogan for us but the very foundation of spiritual life in God leading to the transformation of both the individual and the society. It is a difficult but the only right way’, he said.

According to His Eminence, the recent developments including the blasphemous actions in the Church of Christ the Saviour, the sawing down of devotional crosses in Kiev, Chelyabinsk, St. Petersburg and Arkhangelsk and the blasphemous exhibitions, have compelled Christians in Russia and Poland to join efforts in opposing these manifestations of aggressive secularism. ‘It is not a matter of inter-church corporative interest but a common effort aimed to preserve faith and morality in society, to prevent any repetition of the tragic experiments for building public welfare without God’.

By signing the Message, the Christian religious leaders in Russia and Poland have opened up a way for restoring and consolidating relations of peace and good-neighbourliness among the two nations, Metropolitan Hilarion said, adding, ‘Now we have to make concrete steps towards rapprochement between the Russians and the Poles. We should be patient towards each other, setting our hopes on the younger generation who will defend the identity of our nations as grown on the foundation of Christian civilization’.

The participants gave a high assessment to the Joint Message as an important contribution to the consolidation and development of relations between the two countries.

After that a briefing for journalists took place. Answering questions, Metropolitan Hilarion said, ‘The work on the Polish question should be followed up by historians and philosophers. We as representatives of the Churches have made an important step for solving this problem. We have sought to look at the Russian-Polish relations from the Christian perspective. When we worked at the document we realized that there were historical points on which we would always differ because each side has not only its own history but also its own vision of history. And we cannot impose our vision on others, nor can we abandon our own vision in favour of a different point of view. What we can do however is to look at the past from the Christian perspective of forgiveness and reconciliation and, having freed ourselves from the load of grievances and mutual accusations, to look into the future and see that we have many common tasks, many common challenges, and we can work together for our common future’.

Metropolitan Hilarion stressed the importance of the liturgy celebrated together by the heads of the Russian and Polish Orthodox Churches on Mount Grabarka on the Day of the Holy Transfiguration. Each year on this day, scores of thousands of Orthodox believers flock to Grabarka. ‘Many walk from as far as Bialystok and even Warsaw, carrying crosses to put them on the mount. The holy mount is covers all over with crosses, large and small. I think it is a most eloquent answer to all those who seek today to undermine our Church by sawing down crosses. Ten new crosses will be put in place of every sawn-down one’.

It is very important, His Eminence said, that the Message was read out in all the Catholic churches in Poland, in the Church of Christ the Saviour and reached through the mass media all the Orthodox believers on the day when it was signed. ‘I think it is the beginning of a long and positive process’, he noted, ‘When we will commemorate the 400th anniversary of the end of the Time of Troubles in a few weeks’ time, we will revisit the same themes and the same questions to see how timely and important this document was’.