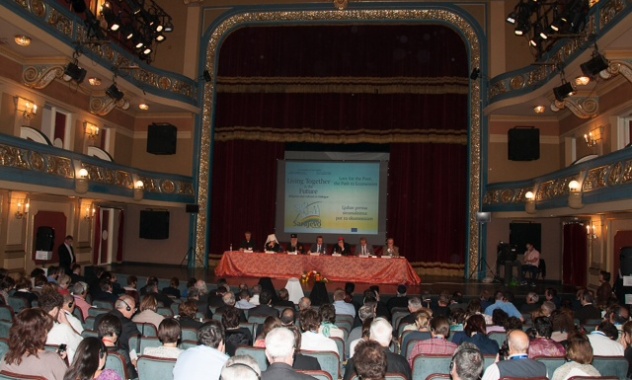 On September 10, 2012, Metropolitan Hilarion, head of the Moscow Patriarchate’s department for external church relations, participated in the panel discussion on Love for the Poor, a Way to Ecumenism, held at the world meeting ‘Prayer for Peace’ in Sarajevo, Bosnia and Herzegovina.

The discussion was chaired by Marco Impagliazzo, president of the Community of St. Egidio, a Catholic lay association. Among the participants were Patriarch Irinej of Serbia; Cardinal Kurt Koch, president of the Pontifical Council for Promoting Christian Unity; Olav Fykse Tveit, general secretary of the World Council of Churches; Mgr Marco Niavi (Community of St. Egidio) and Paulo Lockmann, chairman of the World Methodist Council.

In his address, Metropolitan Hilarion stated in particular, ‘The works of charity require not confessional closeness but truly universal scale so that the world could see the love of God that cleanses sins and grants people inexhaustible joy…’ while inter-Christian dialogue is unthinkable without consideration for one another in love and desire to open oneself to one’s neighbour and help him’. If dialogue between Christians encounters difficulties today, it is primarily because our love for one another has weakened. The active service for the poor should not turn into formal charity. On the contrary, it is called to become witness to the love of God that fills the hearts of believers.

The joint witness to this love opens up a broad opportunity for Christian of various confessions to cooperate. In his remarks, Metropolitan Hilarion dwelt on the positive examples of such cooperation, in which the Russian Orthodox Church participates today, and spoke about the service of charity carried out within the Russian Church itself.

Patriarch Irinej spoke about the contribution the Serbian Orthodox Church made in the ecumenical movement, focusing on the 1700th anniversary of the Edict of Milan, a document of common Christian significance, to be celebrated in 2013.

Cardinal Koch stressed that the notions of Christian love (Lat. caritas) and ecumenism were inseparable, for the very possibility for dialogue is directly dependent on the extent of love the followers of Christ have for one another, while love, in its turn, always leads to dialogue. He also highlighted the teaching of Pope Benedict XVI on active Christian love, pointing to the need for profound theological reflection on the mystery of the Incarnation of the Son of God who became one of the poor.

Dr. Tveit focused on the active service of neighbours as one of the basic aspects of the ecumenical vision, which was inherent in the World Council of Church from the very beginning. The further development of this potential in the work of the WCC can contribute to the way out of the crisis in which the ecumenical movement has found itself today.

Mgr Niavi noted once again that love of the poor was one of the fundamental religious principles on which the Community of St. Egidio was founded. The Community has maintained active cooperation with various Churches in this field, in particular with the Moscow Patriarchate’s synodal department for charity and social service.

Bishop Paulo Lockmann spoke about the personal ecumenical experience he gained in Brazil where inter-Christian solidarity is manifested especially among the poor.

In conclusion, the participants in the panel discussion answered numerous questions from the audience.