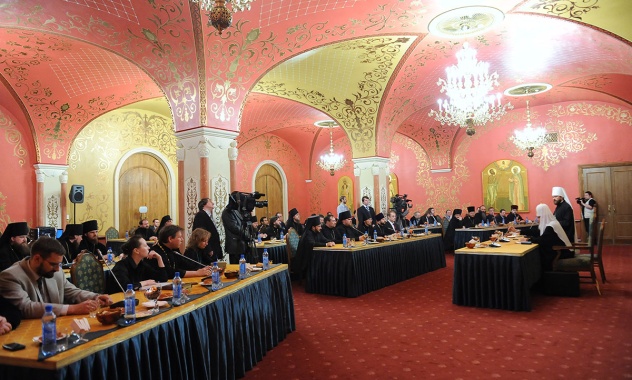 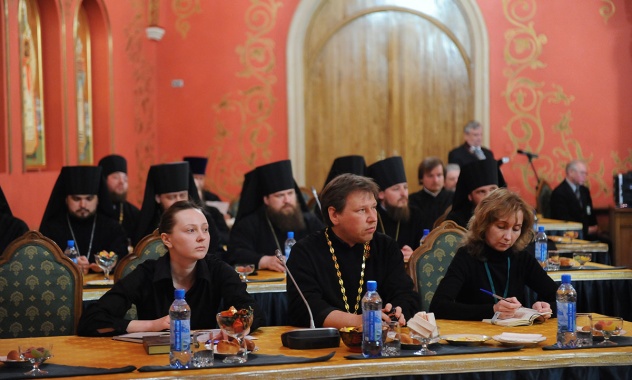 His Holiness Patriarch Kirill of Moscow and All Russia met with students of Sts. Cyril and Methodius Post-Graduate and Doctoral School, on 7 May 2010 at the Red Hall of the Church of Christ the Saviour. Participating in the meeting were also Metropolitan Hilarion of Volokolamsk as rector of the School, Archpriest Vladimir Shmaliy, its pro-rector, and A. Mramornov, secretary of its academic council.

The rector greeted the Patriarch and informed him about the programs of the School and the educational process in it. He said in particular,

Your Holiness, I am happy to greet you at this meeting with the students of the Church’s Sts Cyril and Methodius Post-Graduate and Doctoral School – an educational institution which you initiated and which is called to live up your vision of the highest stage in theological education offered by the Russian Orthodox Church.

As the School has functioned less than a year, it is too early to sum up its work. The preliminary result is that this educational institution has established itself.

There are three directions in its work: further training of those who already occupy important posts in our Church or capable of occupying them in the future; training for Candidate’s degree intended to last three or four years and to give an opportunity for post-graduate students to write a Candidate’s dissertation on a particular area of theology; and finally, studies for Doctor’s degree for our students to deepen their knowledge in a particular area and to write a Doctor’s dissertation, which by its quality should be a scientific discovery.

For the first time in the history of theological education in the Russian Orthodox Church, a Doctoral program has been developed. If earlier the Doctor’s degree was normally granted to venerable theologians on the strength of their total services, which was essentially an honorary degree, today an opportunity is provided for one to defend one’s doctoral thesis and be granted the degree on the basis a research he has carried out.

From the next academic year, we plan to launch a Master’s program for the most talented graduates of seminaries who hold bachelor’s degree. We will thus broaden our capability to attract the best graduates of seminaries. In addition, we plan to run the Master’s program after the respective pattern used in the West today, with its emphasis on a student’s independent work and free choice of special courses, and we ask Your Holiness’s blessing on this initiative.

The School gives special attention to linguistic studies. We believe every post-graduate student and every church executive should have a perfect command of at least one foreign language and a working command of a second one.

The task of the Post-Graduate School is to be a sort of bridge between the Western system of theological education as part of the so-called Bologna system, and the tradition which has established itself in our theological schools. We should not lose the best things we have in our educational system but create more solid opportunities for our students to make independent studies.

Your Holiness, I would like to thank you on behalf of all the students for this opportunity to meet them and to ask you to talk to each of them.

Patriarch Kirill thanked Metropolitan Hilarion for having established the Post-Graduate School and stressed the importance of this institution for the Russian Orthodox Church. He said,

Your Eminence, thank you for your introductory remarks but more than this I thank you for having organized the educational process and for having established the School itself. Indeed, the need for highly qualified theological personnel in the Russian Orthodox Church has been very tangible throughout its modern history. We have lived with a personnel shortage throughout the post-revolution history of the 20th century.

In the late 1990s and especially in the beginning of the 21st century, the situation has begun to change because a great number of educated people have begun to come to the Church and to embark on the path of church service. For the last ten years, the average educational level and intellectual potential of our clergy has certainly risen. It gives us an opportunity to really begin a very intensive and rightly organized training of our intellectual potential and church leaders.

Then Patriarch Kirill talked to each student. He was interested in various aspects of the educational process, the ability of students to combine training with church service, themes of their research works, progress they made in work on their theses, difficulties they encountered in their research work. The students in their turn had an opportunity to ask him questions.

The meeting lasted almost three hours. His Holiness Kirill gave his primatial blessing upon all the professors and students of the Church Post-Graduate and Doctoral School.